The name is Studio Suhag. The location is a small industrial town in central India, exactly half-way between Mumbai and Delhi. The photographer is Suresh Punjabi. The images are scanned from medium-format negatives recently retrieved from Suresh’s monsoon damaged godown.  He calls it a godown (warehouse) but actually it is half a floor in a rented house in which a sudden influx of monsoon rain had dislodged tens of thousands of negs, all carefully filed and sequenced, transforming an ordered archive into a mouldering mush on the floor. Several days of careful sifting produced maybe a thousand printable negatives, the rest remain on the floor in an increasingly jumbled mess. 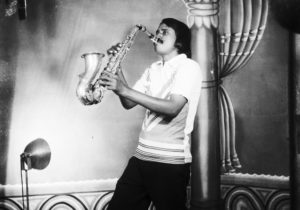 The earliest images date from the late 1970s, the most recent ones from the mid-1980s.  Suresh himself presents a historical narrative that focuses on the tiny space of his studio and looks back – with a certain fascination – to an analogue era of genuine artisanal inventiveness. It is a time of buckets, chemicals, cramped spaces, and staying up all night developing and printing work for clients eager to see their pictures the next morning. My own perspective pivots around my first visit to the town in late 1982 and the social history of a rapidly evolving settlement which I have continued to visit ever since.  A broader perspective would want to frame all this in terms of the social and political crises of the 1970s which led to Indira Gandhi’s ‘Bonapartist’ Emergency, the reaction against this, the assassination following Operation Bluestar and so on.

But looking at these images one is struck by their claustrophobia and near-immunity to the astonishing events of that broader political history. There are dreams, aspirations, identities, and rhythms which intrude upon these photographs but for the most part one is left with a sense of an endlessly repeated space within which Suresh sculpts his customers. There is a narrative here of villagers and townspeople, poor and rich, devout and cosmopolitan, but these are all made visible in a very particular space in which a relatively fixed repertoire of backdrops, props, lighting and framing techniques gradually become recognizable.  What kind of history might be mobilized by, and used to frame, these images?

Nearly all the negatives from which the present images are printed bear evidence of water damage and some of this is evident in the prints too. The other material trace is that of the space of the studio. In the late 1980s Suresh switched to 35mm format. Not only was this much cheaper but its format was also closer to the format of the prints which most clients desired. Many customers demand ‘full-body’ images. Using a medium format camera (Suresh’s was a Yashica) in the small confines of the studio to capture a full-length pose always meant that all the ‘noise’ of the studio was also recorded in the negative. Suresh would step back, framing his subject centrally in the image and at the sides would intrude studio lights, curtains, props and so on.   This noise was all cropped out in the printed image since it was mere infrastructure designed to deliver an illuminated and adequately posed central body and was of no interest to the customer or to Suresh. But it was all there in the negative, a kind of silent Brechtian margin awaiting recovery. The effect is frequently reminiscent of Samuel Fosso’s work in the Central African Republic: a standing figure is usually positioned at the centre of the space in front of a painted backdrop and flanked on either side by tall studio lights. Rediscovering those margins, and other secrets of the enchanted claustrophobic space of the studio, is one of the pleasures of working on this archive.