Studio Suhag is one of several dozen photographic studios in a small town exactly halfway between Mumbai and Delhi. Established 40 years ago, it still has a studio area with a backdrop and lighting rig. It remains dedicated to making its customers “come out better”, allowing them to become “more” than they are in everyday life. When it first opened, it did this through the provision of props (including sunglasses, jackets and ties) for its clients. It now uses Photoshop, to visualize customers’ desires—aspirations that are no longer dependent on performances within the physical confines of the studio’s walls.

In the analogue era, roughly until the 1990s, the physical walls of the studio were highly visible. They provided background and structure to images, forming an inescapable component of every photograph. The back wall conjured up the interior of a palace. A florid border emerged from the floor, and on the left, a column to which drapes had been tied provided a distant echo of Parsi theatre and Raja Ravi Varma’s aesthetics. The walls on either side were painted with rural scenery and a geometric design of pine trees.

I became familiar with these long-gone designs after we salvaged several thousand medium-format negatives from the studio godown (a window had blown open during the monsoon, turning a carefully ordered archive into a mouldering pile of history). Scanning and printing the negatives, one gradually learnt the topography of the studio, and the position of the walls often served as the only clue to the front and back of negatives, so badly damaged were they by that monsoon. 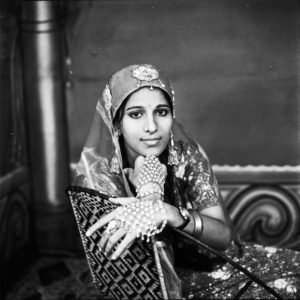 Wonders emerged—a girl in Kashmiri dress in the left corner by the column, a family (the wife wearing elaborate spectacles) that came to mark the husband’s exuberant beard, grown during the month of Shravan, and one of the many film-obsessed customers whose extraordinary trousers seem to shout “my flares are bigger than yours”! In another image, a smartly dressed young man is flanked on his right by a strange shiny strip that a microscope reveals to be a roll of 120-format film hung up to dry. The walls of the studio in the analogue age also encompassed the processes through which live bodies were transformed into photographs. 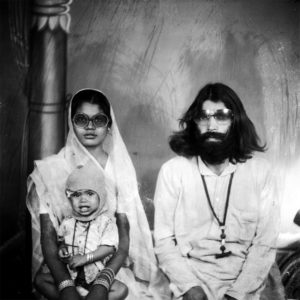 The 21st century studio continues to rely on weddings as a major source of revenue, although the camera can now be mounted on a remote-controlled crane or drone for action aerial shots. Mugshots are an increasingly important part of the business, especially as clients request photographic copies of drivers’ licences and Aadhaar cards. 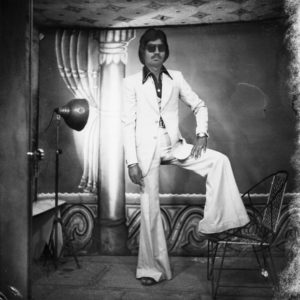 Though the physical walls of the studio remain, these rarely feature in the photographs themselves. They have been replaced by new virtual backdrops supplied by Photoshop. Customers who previously came on Eid with their goats now come with their families so they can be inserted in digital floral landscapes or against super-saturated and highly manipulated images of the Taj Mahal. Children who used to don the studio’s collection of Krishna clothes and hold a grubby flute are now digitally injected into glossy divine landscapes. Brides and grooms to be, whose faces were previously improved by colouring the negative, are now gifted new complexions by the computer. Some of the age-old dilemmas endure: The job of the studio photographer, both analogue and digital, is to make their subjects more beautiful but not too beautiful. Reminiscing about an analogue-era studio, photographers recall many occasions when it would turn out that the bride or groom (on the marriage day) did not look like their photographs, and the consternation this caused. The volatility of the image is not new.

Likewise, the emerging new aesthetics of “candid” wedding photography can provide the basis for the consolidation of hierarchies within studios: Frequently, the proprietor will assume the role of maestro of the “candids”, with more junior employees tasked with photographing the basic infrastructure of the event itself and the blocks of people who form the ground troops of the contract between distinct lineages that lie at the core of north Indian marriages.

Digital images intensify familiar problems as they ratchet up the reality stakes: What they show can make the gods more and more “real”. Consequently, studio photographers often express unease about their complicity in working with religious entrepreneurs who know that the camera and computer are vital tools in the building of a consumer/devotee base. Many studio photographers who are asked to produce portfolios for local godmen exhibit both pride and unease in their accomplishments.

A different kind of anxiety marks their understanding that technology is also gradually liberating the public from the studio. In the part of central India with which I’m familiar, it is not simply that cellphone cameras are occupying the space previously taken by studios (for example, by producing images of friends at Diwali, or capturing the moment when you first wear new clothes). Rather, the cellphone camera can be seen to be enfranchising a whole new world view.

In villages, there is what might be termed “Hindu citizen journalism”. In 2011, one Brahmin friend was walking down the main street in the village, his phone in hand, when he looked up at some fellow villagers who were placing a brass kalash on top of a newly built Shiva temple. As they were doing this, Kishor realized that Shiva was sending down a beam of light from his third eye to perform Prana Prathishtha (idol consecrating ceremony) to energize the temple. Kishor had seen this happen several times before, but thanks to his phone camera, this time he was able to capture the process as it happened. He then had a 12×8 print of this made at a local photo studio; this was laminated and formed part of his puja ensemble. 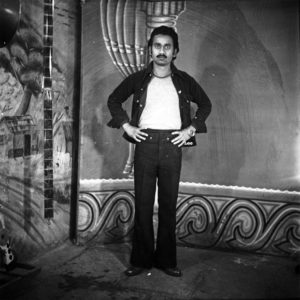 Other widely circulating images are believed to be the authoritative product of a similar mobile serendipity. The five-headed snake from Jamshedpur first appeared in a local newspaper and was rephotographed by an enterprising local studio that sold laminated prints. These were soon displaced by a more persuasive, better Photoshopped version, which is now viral on the Web. Such miraculous photographic images are viewed and make sense alongside photographs of events of which villagers have direct experience. Not only those that show Shiva inaugurating his new temple in the village, but ones of twin calves. Ganga, their mother, gave birth to them about 18 months ago and you need a villager’s understanding of bovine uterine science to grasp how truly rare this is. Word spread quickly and numerous villagers came with their mobiles to photograph this astonishing event.

Villagers are invested in the photography of these occurrences because they provide evidence for, and validation of, their subjugated world view. Villagers perceive themselves as oppressed by urban “official” life-worlds where shopkeepers condemn them as hicks. In rural life-worlds, wondrous events have, until now, largely gone unrecorded, remaining unvalidated. You might see a five-headed snake fleetingly (lots of villagers have), but it was never photographable, it could never be placed inside the walls of the studio. Now, that studio is always in your pocket. This studio without walls poses an increasing threat to the livelihoods of small-town photographers, but it poses a bigger challenge to what we think are the kinds of phenomena capable of being made visible.

Christopher Pinney is the author of The Coming Of Photography In India. He is a professor of anthropology and visual culture at University College London.